This is an amazing idea by Sea Rocket Bistro.  On February 13th, they will be holding a cooking class, featuring a vegan, 3-course meal. The menu sounds delicious!

The price is $60/person (it would’ve been cute if they had a slightly cheaper couple’s price), and includes the price of the ingredients, the instruction, tax, and some champagne!  To RSVP, call 619-997-8043 or e-mail elena@searocketbistro.com.

Chef Jenn has a blog that you can check out for other cooking class information.

I love cooking vegan because you put vegetables in the forefront rather than something on the side of a slab of meat.  (I do love me some meat slabs though.)  Veggies and grains can be made into so many diverse dishes.  This cooking class sounds like a really fun experience!

I didn’t realize that I had a hankering for Southern-style soul food until my food was set down in front of me.

I had come to Souley Vegan on a last minute recommendation from a friend, who told me nothing more but the name, cross streets, and a warning that it was a bit of a walk from the BART station (“but well worth it”). I eagerly trotted down Broadway, keeping an eye out for the sign.

It’s a very casual atmosphere inside. To order your food, you need to come up to the front where the chalkboard menu is located. 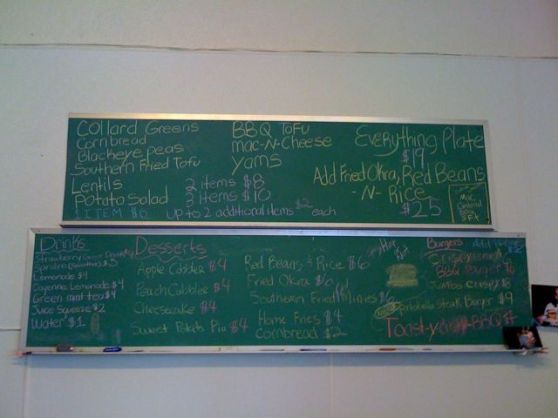 If you can’t tell from the picture, there are a list of about 10 items to choose from. You can get a plate of 2 items for $8 or a plate of 3 for $10. There are also burgers and other specials.

I got a recommendation (unasked for but still appreciated) from one of the women working there. She had asked if I had ever been in before. She immediately suggested the southern-style fried tofu, black eyed peas, and collard greens. I nixed the greens and chose corn bread instead. (I was craving corn bread, for some reason.) 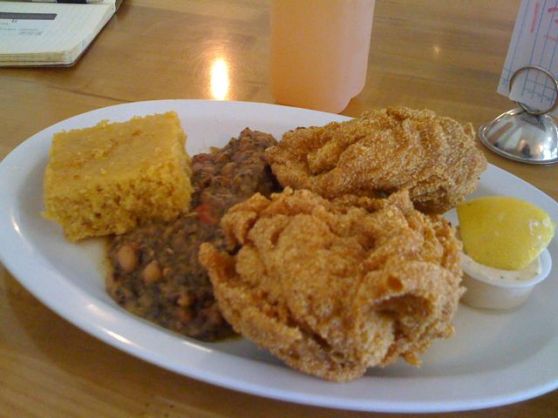 Are you drooling? If you’re not, there’s something seriously wrong with your taste buds (or my iPhone camera). Because I was immediately drooling after the runner set the plate down. I had the presence of mind to take pictures before digging in.

Seriously, look at that golden, crispy breading. More than half of each delicious mound was breading, with a thick slice of tofu inside. It was to die for. And the black eyed peas? I don’t even know how to describe how perfectly seasoned they were. The corn bread was too sweet for my taste, but the texture had a warm stickiness to it that I liked. Crumbled and mixed with the black eye peas, it did all right.

If you’re ever, EVER in the Bay Area, and particularly in Oakland, GO HERE. Absolutely, hands down, the best, most exciting food I’ve had this whole week. And it’s close to the Trappist, which I wrote about last week, so you can go have some delicious beer after some delicious food.

(P.S. If you want to spend $4 on a non-alcoholic drink, I highly recommend the cayenne lemonade that they have at Souley Vegan. An aftertaste of spiciness that goes very well with the sour and sweet of lemon! If you like the mango-chili or pineapple-chili popsicles at Viva Pops in Normal Heights, you’ll love this lemonade.)

A disclaimer: I do not adhere to a vegan diet.

Herbivore is a vegan restaurant that serves breakfast, lunch, and dinner, everyday, at all three of their locations. I would not have sought the place out myself, if it weren’t for a vegetarian friend who recommended me their breakfast.  I told a vegan friend that I was going there and he recommended AGAINST their breakfast, and instructed me to go for any other meal.  I got there around 11:30am and was left at a dilemma.  It was the perfect time for both breakfast and lunch and I flip-flopped between the basil pesto tofu scramble or a falafel wrap.

As you can see, I decided on breakfast. The homestyle potatoes were seasoned very well. Most breakfast diners don’t season their potatoes, letting their customers salt-and-pepper the heck out of them. The toast was good, despite there being no butter/margarine/Earth’s Balance (yes, I know WHY there wasn’t butter). Granted, maybe it was too lightly spread for me to notice. The JAM, though, my goodness, I would eat that jam any day!

My biggest problem was the tofu scramble. I like my tofu scramble to be firm and chunky. Herbivore’s tofu scramble was a runny mess, which I think works well if you wanted to dip the toast in. Actually, in retrospect, that’s probably the intention. Aside from the texture, though, the flavor of the scramble was not bad, but it wasn’t great either.

After a cursory glance at their menu, I feel that lunch or dinner would be more appealing to a meat-eater. Breakfast would probably be more appetizing if you don’t already have pre-conceived, non-vegan notions of what breakfast “should” be like. (I kept thinking about how delicious bacon would be dipped in the scramble.) So if you’re non-vegan like me, I’d suggest going for lunch or dinner.

On a slight side note: I do love the breakfast at Pokez, in Downtown San Diego.  Mm, their vegan machaca is delicious!

Feel free to get in touch with inquiries on freelance or custom work or questions and suggestions about the blog.

I specialize in paper crafts, upcycled jewelry, and freelance content and article writing.